When limitations make doing anything an effort, one man has found a great way to enable him to spend time doing what he wants to do, rather than what he has to do…

Stephen Savill, 58, has been disabled since he was 23, as a result of a brain haemorrhage and stroke. Deterioration in his abilities due to general ageing has prompted, on the advice of his Occupational Therapist, the installation of Closomat’s Palma Vita wash and dry toilet and Aerolet Tilt toilet lifter.

It’s been a life changer! He can spend time doing the things he wants to do, and not the things he has to do, explained Stephen’s brother Mark, who helped organise the installation, by Closomat, at Stephen’s extra care flat in Grays, Essex.

Before, he had to transfer from his powerchair to a rotunda (patient transfer system) to toilet, and back again. The effort left him exhausted, especially when doing it several times a day. Now, he just positions himself against the Aerolet, it lowers him over the WC, the Closomat’s functions ensure he is clean without having to try and wipe himself, and the Aerolet lifts him up again when he’s finished,” added Mark.

The installation went with minimal intrusion, a professional, high quality job, and backed up by a quality control visit, when they also made sure Stephen understood, and was happy, using it all. 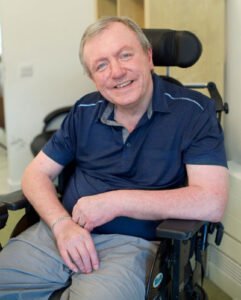 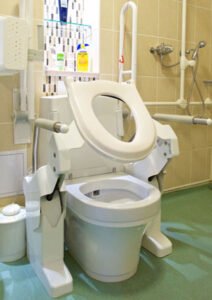 “Better than a throne!”