Coping with a ‘life-changing’… 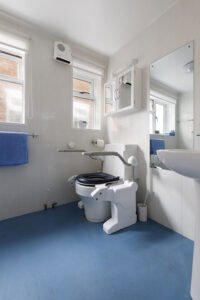 Steve (53), has spasticity down his entire right side following a serious car crash over 30 years ago, and IBS. In a coma for six weeks, he was told at the time he would never walk again; he has defied science to that extent, but cannot straighten his right leg.

The former RAF officer from Bognor Regis has, with financial assistance from the Officers Association and on the advice of his local authority Occupational Therapist, replaced a conventional WC with a Closomat Palma Vita shower/ wash dry toilet operated by touch sensitive hand switch, with Aerolet Tilt toilet lifter over. Steve’s tilting version means he can just lean against the Lifter for it to lower him over the toilet pan, then return him to standing after. It has been specified with large control buttons, on the left side, with fold-away arms, to suit his specific limitations.

It means he can undertake his intimate hygiene needs single-handedly, without any care intervention.

It’s great! It was getting very difficult for me to use the old toilet on my own. It would take me a long time to get on and off and leave me feeling so tired. I would get sore too, from wiping myself. It also saves on toilet tissue and wet wipes! This is so much quicker and easier. It means I keep my dignity and independence: it has avoided me having to ask my wife to help me, as I was finding it harder and harder to ‘go’ on my own.